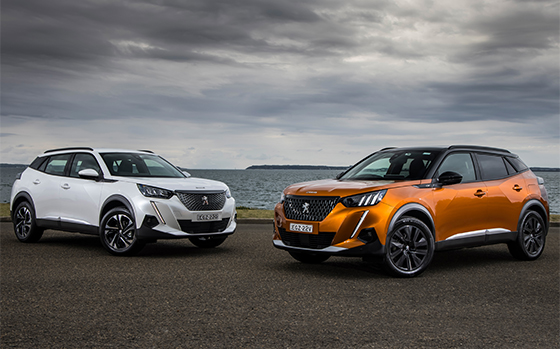 To note: The GT Sport 155 produces an impressive 95 kW per litre of engine capacity, which is the highest power to engine cubic litre ratio in its "VFACTS SMALL SUV under $40,000" category.

For Allure the PureTech 130 is mated to the ASIN six-speed Efficient Automatic Transmission (EAT6) and for GT Sport the ASIN eight-speed EAT8, both drivetrains maximising overall performance and fuel efficiency.

Despite their ample power outputs, both PureTech engines are exceptionally frugal, the 96kW example delivering 6.5 litres/100km on the NEDC Combined Cycle and the 114kW variant an efficient 6.1litres/100km with corresponding carbon dioxide outputs of 148 and 138 grams per kilometre (WLTP) respectively.

A compact SUV car designed and engineered to be as much at home on city streets as it is on country roads, Peugeot's all-new 2008 delivers plenty of road presence thanks to its bold nose, sharp and muscular lines, a no-nonsense, four-square appearance courtesy of its 'wheel at each corner' stance and modest front and rear overhangs which also serve to maximise interior space.

Measuring 4.3m long, 1.77m wide and 1.55m high, the all-new Peugeot 2008 SUV seats five comfortably with room for 180cm-tall adults on the back seat. The capacious boot holds 434 litres (min) and 545 (max) with the back seat raised, ensuring day-to-day practicality. Added versatility comes in the form of a split/fold rear seat which, when fully folded, increases luggage capacity to an impressive 1,015 litres (min), and 1,467 litres (max).

Peugeot Australia General Manager, Kate Gillis, said with this car representing a major leap forward in every aspect of design and engineering, the 'all-new' tag is appropriate.

"Peugeot is redefining the SUV class with all-new 2008 SUV by embracing three important areas that resonate with buyers – engineering, comfort and technology.

"The end result is a new and exciting vehicle bringing a fresh perspective in its approach to the segment, an outstandingly stylish car delivering innovative design and engineering features, impressive equipment levels and great drivetrain combinations."

"At Peugeot we know the strength and competitiveness of Australia's SUV market and all-new 2008 range will quickly become a vehicle highly sought-after by buyers," she added.

The latest version of Peugeot's 3D i-Cockpit® for all-new 2008 SUV features a compact steering wheel and a new 3D display which projects information in hologram form in the foreground and background. This prioritises information naturally closer to the driver's eye-line and may help improve reaction time.

The centre console-mounted infotainment system has a 7-inch colour touchscreen for Allure and 10-inch screen for GT Sport. 3D Navigation is standard for GT Sport while MirrorScreen® for Apple CarPlay™ and Android Auto® connectivity is standard across the range.

Despite having to contend with the effects of the unprecedented COVID-19 global pandemic, all-new Peugeot 2008 SUV has already struck gold in Europe, winning the coveted 2020 Red Dot Award for Product Design.

An electric opening sunroof is optionally available to the GT Sport variant, and a total choice of 7 colours including three special 3 coat / pearlescent paint colours on the range.