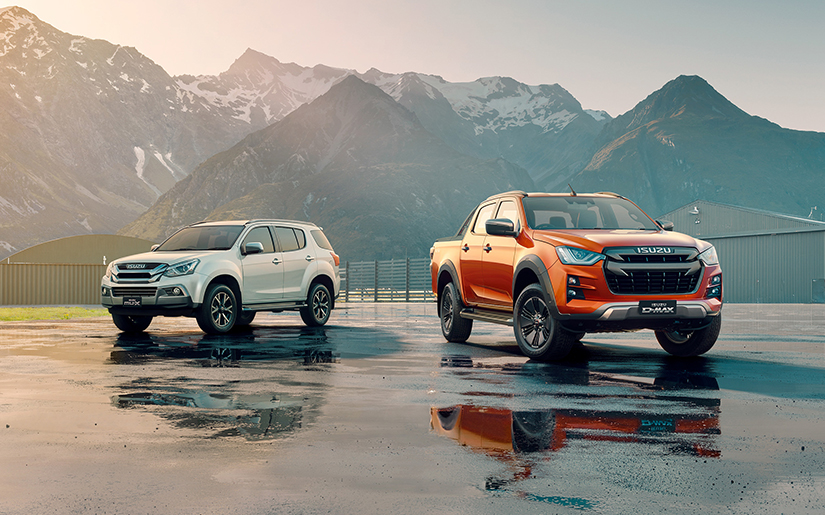 February 2021 Isuzu UTE Australia (IUA) has marked 2021 as a milestone year, celebrating the delivery of its 200,000th vehicle sold in Australia, since commencing operations back in November 2008.

"Milestones such as this would not have been possible without the loyalty of our Australian customers who have placed their trust in our vehicles and I'd like to thank each and every one of them," said Isuzu UTE Australia Managing Director, Hiroyasu Sato.

"Whether it's a skilled tradesman in a D-MAX Cab Chassis, a family with young children in an MU-X, or a couple looking to explore our great outdoors, there is an Isuzu vehicle to suit everyone and we appreciate that we are the vehicle of choice for these 200,000 Australians," he said.

As reported by the Federal Chamber of Automotive Industries (FCAI), by the end of February 2021 an accumulative total of 148,077 D-MAX utes and 52,038 MU-X SUVs have been delivered in Australia.

Over the years, demand for both utes and SUVs have grown exponentially, with a ute claiming top-honours in the annual FCAI sales charts since 2015. Out of the 916,968 new vehicles sold in 2020, one in every two vehicles sold was an SUV (49.59%), whereas utes accounted for 19.56% of the new car market—signifying the relevance of the D-MAX ute and MU-X SUV within their respective segments.

IUA was, and still is no exception to this rampant ute and SUV sales growth; after selling their 100,000th vehicle by March 2017—nine years after starting sales in 2008—IUA went onto doubling that effort to 200,000 vehicles sold, less than five years later in February 2021.

In September 2020, IUA launched the third-generation D-MAX ute, which has since then climbed the sales charts into 3rd position in the '1-Tonne Ute' segment, delivering 11,141 D-MAX utes over the past six-months (September 2020 – February 2021).

Over the same period, the MU-X has seen similar levels of sales success; earning itself 3rd position within the 'SUV Large <$70K' segment. More importantly against its direct-rivals in the 'ute-based SUV' segment, the MU-X has cemented its position as the top-selling ute-based SUV for the sixth-consecutive year (2014-2020) since its Australian-debut in 2013, a milestone only made sweeter with the marque's 50,000th MU-X delivered back in November 2020.

With 54 automotive brands biding for sales in Australia, IUA finished 2020 as the 13th ranked manufacturer, with 22,111 vehicles delivered. So far in 2021, IUA has managed to continue that momentum from last year, so far selling 4,874 vehicles across January and February alone—enough to earn the marque 12th position in the annual sales race.

For decades, Australian's have long been attracted to both utes and SUVs as their vehicle of choice—due to their unrivalled practicality, versatility and as a dual-purpose solution for modern families with busy lifestyles. And, with demand at an all-time high and IUA close to delivering its 150,000th D-MAX ute in the near future, another milestone celebration for IUA looks to be just around the corner.

For more information on the range of Isuzu D-MAX utes and MU-X SUVs, visit www.isuzuute.com.au

THE ISUZU D-MAX IS LAUNCHED IN AUSTRALIA

IUA launches locally with the internationally branded D-MAX, taking on the ultra-competitive 1-tonne ute market with a powerful and efficient 3.0L common-rail turbo diesel engine. IUA opens with 39 dealerships in its first year.

The new-look Isuzu D-MAX is launched to the demanding Australian market, continuing the tradition of Isuzu UTE's tough, stylish and economical vehicle line-up.

A NEW ERA FOR D-MAX

The dawn of a new era for Isuzu D-MAX. Retaining an exclusive 3.0L engine, the totally new D-MAX landed in Australia and brought with it new levels of power, comfort and safety.

IUA introduces a five-year warranty with five years Roadside Assistance for all new vehicles – a testament to the immense confidence in the reliability, strength and durability of our engineering.

Eagerly anticipated for years, Isuzu brings back a serious 7-seat SUV that offers a balanced combination of performance, comfort, style and off-road ability. Sales commenced in Australia in December 2013.

IUA records the sale of its 50,000th vehicle since entering the Australian market in late-2008. IUA's accelerated growth in 2014 was in part helped by the introduction of the MU-X, as well as stronger fleet sales performance which was buoyed by the introduction of an ANCAP 5-Star safety rating and improved 3.5 tonne towing capacity on specific D-MAX models.

IUA's Local Sports Sponsorship Fund is launched, and in the coming years delivers over $1,000,000 of funding into junior community sporting teams and clubs around Australia.

A new initiative to help their owners to get the most out of their Isuzu vehicle in a safe and structured environment under expert tutelage – The I-VENTURE CLUB quickly becomes a hit with Isuzu owners, offering them the opportunity to join excursions to some of Australia's most breathtaking — and challenging — off-road destinations.

Following strong EOFY sales in June, IUA reaches a milestone of 90,000 vehicle sales in the Australian market since launch in 2008. MU-X cements its place as the top-selling ute-based SUV.

A CENTURY IN THE MAKING

In Isuzu's centenary year, and in a world first for Isuzu, the 17MY Isuzu D-MAX & MU-X launches with a Euro5 emission compliant drivetrain developed exclusively for Australia. With the upgraded 3.0L turbo diesel engine producing 430Nm of torque and with new 6-speed automatic & manual transmissions, the new D-MAX & MU-X is designed to impress in the demanding Australian market and ensure continued sales success.

Winning both 'Best of the Best' and '2018 Car Manufacturer of the Year', Isuzu UTE bests the rest to claim top honours at the annual Roy Morgan Customer Satisfaction Awards.

Reaffirming its reputation for reliability, the 19MY Isuzu D-MAX has been awarded with one of the industry's most coveted accolades, winning the 'Best Work Ute' category in the Delivery Magazine Best LCV Awards for 2020.

Isuzu UTE's owner-exclusive 4WD training program celebrates its fifth year of operations with over 3,500 owners learning how to 'Go Their Own Way' under the watchful tutorage of accredited 4WD trainers.

The result of 4-million kilometres and 6-years of development testing, the highly-anticipated, third-generation Isuzu D-MAX launched in Australia with unprecedented levels of standardised safety and connectivity equipment. Featuring a new 3-litre 4JJ3-TCX turbo-diesel engine with 140kW and 450Nm, the entire range features a new stiffer body and chassis, new suspension and new payload weight capacities with up to 3.5-tonne towing.

THE SAFEST UTE ON AUSTRALIAN ROADS

Tested to the highest safety standards ever seen on Australian roads, the 21MY D-MAX was the first vehicle in Australia to be tested and to score the maximum 5-star ANCAP safety rating under the new 2020 testing and rating criteria.

Seven years since its introduction in 2013, the MU-X has not only grown in popularity to sell over 50,000 examples in Australia but has also gone onto retain its crown as Australia's #1 selling ute-based SUV for the sixth consecutive year.

Only a few months after debut and the All-New D-MAX has won three of the industry's most-coveted accolades: News Corp Australia's '2020 Ute of the Year Award', the 'West Australian Ute of the Year' and the torturous 4WD 24/7 '4WD Ute Comparison'.